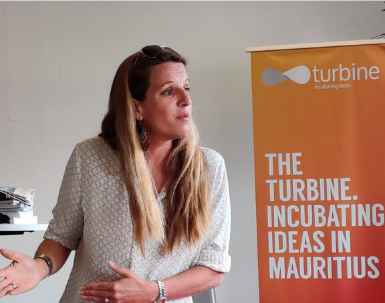 In November 2019, we had the pleasure of welcoming Delphine Taylor – The person responsible for l’Express Property

In 2008, Delphine Taylor launched Lexpress Property, the first online web portal for selling and renting property in Mauritius. Many brilliant entrepreneurial stories start with a need identified from different life experiences. This was also the case for Delphine Taylor.

Her professional career started in Paris, her finances were very low after ending a backpacking trip and was lucky enough to have a friend host her for a year. This was during 1998 and at the time there were no jobs to be found in her field, so she took whatever came her way: babysitting, waitressing, call center jobs… And this is how she got noticed my one of her clients, Cisco Systems, who offered her a job with responsibilities that were below her capabilities, but she took the job anyway as she wanted a to at least have a way in.

6 months later she was promoted to the coordinate the CRM project in France and she got her certification in Siebel to specialize herself. She was then headhunted and landed a job at Lectra Systems as a CRM consultant, to consequently become the international head of the project. Her team implemented 35 subsidiaries across the world. Delphine says that working at such an international level allowed her not only to work on the same project from 35 different points of view but also, using 35 different methodologies, which she says was quite the challenge!

She emphasizes that her key take-away from this experience is that one must not be afraid to start from humble beginnings and to climb the ladder as opportunities present themselves. Everything one learns in so doing can prove to be very valuable, it’s just a matter of putting your ego aside.

After all this, Delphine Taylor moved back to Mauritius and thus began her adventure with Lexpress Property. It all started with herself and a friend, in her room trying to build a website. Taylor claims that at the time, she didn’t have much knowledge about how to start web platforms, but it was an idea that had come to her as a result of her multiple moves and quests for accommodation during her travels.

She explains that her entrepreneurial adventure was not an easy one, that it required a lot of energy, time and perseverance. Many obstacles were met but with every hurdle came a creative solution, which is what made her experience developing Lexpress Property a beautiful adventure.

The most rewarding aspect of this adventure for her is to start on a blank slate and seeing her idea come to life as time went by. Before starting the process of creation, Delphine says that she does a significant amount of benchmarking, she reads a lot and corroborates her ideas with her entourage who challenge her thoughts. She then adapts her idea to the market she is looking to target and launches the product while keeping in mind that the revenue and costs of the business should be the backbone of her focus; this is something that seems very basic but entrepreneurs often get distracted from the main objective of a business which is to make money.

Often young aspiring entrepreneurs contact Delphine for some insight into the businesses they are trying to develop. They come forward with beautiful ideas that can no doubt interest the consumer. Delphine says she is very impressed with the Mauritian entrepreneurs’ creativity and proactiveness. However, she is often presented business plans that according to her, do not describe sustainable businesses as the entrepreneurs developing them have not spent enough time thinking about the different aspects of the business or have just not benchmarked their business against realistic standards; too often, they will think about the product before thinking about the business or the costs associated to that specific product.

Delphine expresses that the Mauritian market is full of talent and that they need a structure that accompanies them throughout their entrepreneurial journey and facilitate start-up funding!

She also shares an anecdote of her entrepreneurial adventure with us: When she launched Lexpress Property, she did a small market research which included 15 real estate agents, equipped with her PowerPoint presentation she set out to go and meet them one by one: 9 of them said that they would not be on-board with her project because they did not believe in it, 4 others said maybe but only one said yes. That was her mother’s real estate company, Villa Vie. Despite this, she still decided to go ahead with the adventure, and what a good one it has been!

At the time, she says, she was not aware of the effort and relentless amount of work this implied. She was lucky to have her husband who was supporting her. There’s always a risk that one chooses to embrace when they embark on the entrepreneurial journey, the key is to evaluate this risk and the associated consequences, but most importantly, one should consult other entrepreneurs as they could help in challenging the project.

She imparts one last piece of advice to us as a conclusion; according to her, there’s one main key to success and that is to prepare one’s project thoroughly before even asking other entrepreneurs and businessmen/women, to challenge the idea.  She then adds that finances are important, she herself decided to partner with La Sentinelle which was a strategic partner. She describes that a successful partnership is a great contributor to the exponential boost to a business.

And finally, she says that the most important aspect of building a business is the team. Any entrepreneur should know to surround himself/herself with people with the right competences and dynamism. They should also learn to create a pleasant atmosphere at work. When people are happy, they perform better. With the right team, everything is possible. This is what makes the Lexpress Property (now Mediatiz) a successful company she says!

Coworking and its many advantages

Why should you start your business at a young age?

Changing career paths at 50
Mobile apps: are they useful to grow your business?

Communication: the key ingredient to building a profitable business
E-Businesses: 6 tips to follow before buying a website
0 replies