Fuck up night – An international movement, first in Mauritius

Turbine co-organized the Fuck up night along with Red Dot, DodoWorkPlay and ICT.IO. The Fuck up night is an international movement that runs in over 250 cities and is an entrepreneurial platform where biggest failure stories are shared and celebrated.  Yes, that is correct, celebrated: Professional failure are often associated with feelings of embarrassment, guilt or shame. Fuck up nights were conceived with the aim of changing mindsets and the perception around failure to turn it into an opportunity to learn, become stronger, and connect through sharing. In Mauritius, rather than taking initiatives and give it all even if it may fail, many people prefer not to take any risk at all. This is because there exists a huge stigma around failure and which is crippling our entrepreneurial ecosystem.

The Fuck Up Night Mauritius

We were honored to have 5 speakers come out and share their biggest Fuck Up stories with us, inspiring and demonstrating others how failure is a fundamental step in the path to success. 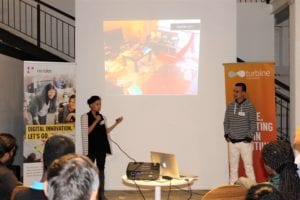 Looking at them,  so happy and positive, one will never have thought that they have been through so many hardships in building Farmcity. Kelly and Wesley, came forward bravely and honestly when sharing their failure story with us. First, they had to face a raging fire that ignited in a neighboring sugarcane field which burnt all their crops. With only 1 year ‘s  earnings to live off of, they had to start again and  this time they a had a new challenge: dealing with the unethical behavior of a contractor. Upon learning about the contractor’s misdeeds, Kelly and Wesley fired him, only to later have the contractor sue them for damages worth for Rs 2 Million. In the 6 months that followed, they spent sleepless nights,  frustrated and desperate, worrying about where and how they could  amass that sum of money. According to Kelly, when roots are strong there is no reason to fear the storm. Despite all the storms, today Farmcity is flourishing. These failures and difficulties taught them a few lessons which are key for any entrepreneur. 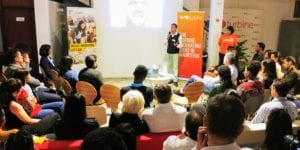 Ashley is a serial entrepreneur. He avidly shared  how he had launched his various businesses and encountered several issues. He faced stagnant stock, mismatched of markets and a misadventure in partnering up with a phony individual  who had little experience in what he claimed to be his expertise and who was in actual fact, a part time actor and before that, a full time teacher. This venture led his business to suffer great loss.

When asked about how he got up from this massive failure, Ashley said that people in Silicon Valley, America, do not turn their back on you because of failures. They celebrate and give respect and support because they believe that failures make you a stronger person; You took the step, tried, failed, lived it and learnt. He admitted that it took him a few months to heal, reflect and strengthen his mind. Ashley added that every entrepreneur has that spirit to get back to business regardless of the deceptions faced.

After 8 times of facing dead ends, one does get stubborn and persistent though it is imperative to know when to stop. With experiences, one does get tuned and Ashley knows that really well.  He has developed his own way of proceeding; according to him, any process should not take more that 2-3 weeks to get done. If it takes more than that, then there is a must for immediate action. 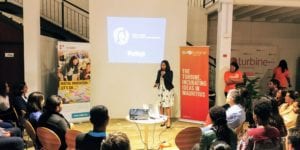 A brave woman entrepreneur whose passion for communication was tested several times.  She narrates her story;

Aisha launched a company with two of her friends at the start of her entrepreneurial journey. The company had everything to succeed; they had clients, the work was being done, clients were satisfied and money was being generated. Trouble started when money started to flow in. The 3 partners started to fight a lot. Aisha found herself out of the company overnight after a board meeting; her two friends had decided to put an end to her partnership. She was left feeling betrayed and with a bank account amounting to zero. Aisha had invested all her savings to this company. A mother of two children, Aisha narrated how she faced that difficult phase with the only support of her children who were very young at that time. She knew that she had to fight back for her family and find a way. She described how she practically camped infront of the doors of CEOs and knocked at each and every door until finally one opened. From then on through word of mouth, deals flew in and Blast became a successful company proudly managing communication crisis for its clients. Aisha remembers telling herself during those critical phase of her career; Even if things are not sound, she has to do what she feels is right so as one day she does not have any regret.

She believes that “One’s success is defined by oneself. ” That is the you define your own success.

Kim opened a Japanese restaurant named Benkei which sold sushi back in 2006. She and her friend invested in this business without conducting any market research. Kim had a day job back then and her partner was managing the business. Kim was clueless that like her, her partner had no experience with the Japanese culture or in business. One day on her way home, Kim learnt that the business went bankrupt and that her partner has fled to another country. The result of this “fucked up” venture was that Kim not only lost her investment but also all her assets including her house. Kim said she also lost her arrogance on that day… The next phase of her life included a lot of self questioning and she meditated back to her core values. She remembered seeing a quote from Indira Gandhi which said “If I die today, every drop of my blood will invigorate the nation.” This inspired Kim and made her work on herself. Kim forgave her partner as she understood that it was her own decision to invest in that business. With the support of her family, Kim’s entrepreneurial spirit finally emerged. She became strongly opinionated and from that day on, she wore her “fuck up” as a crown, like a queen. Today Kim is a Board Advisor and has her own training agency for various professional development.

As organizers, we aimed to change the mindset of people about failure. We are proud and satisfied to learn that people who attended this first edition have really enjoyed and learned from our guest speakers respective fucked up experiences. Many felt inspired and decided to go ahead with their plans.