The Google Africa Conference – ENTREPRENEURSHIP AND INNOVATION IN MAURITIUS

Turbine has been honored to host an exclusive conference for Google Africa, gathering 60 African ICT influential leaders and governmental policy makers, on Friday the 9th March 2018. 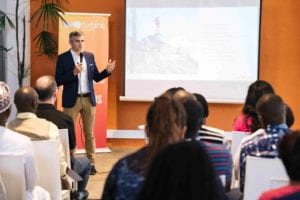 The conference was an opportunity to showcase Mauritius as an emerging entrepreneurial hub. Fabrice Boullé, director of Turbine, and 3 Mauritian start-ups, shared their local experiences.

Fundkiss, a new start-up promoting a crowd-lending digital platform for entrepreneurs, testified how an innovative business can be launched despite the fact that the law does not cater for it. Paul Perrier, one of the co-founders, explained how Fundkiss was able to get the Sandbox licence from the Board of Investment in order to start its operation.

MySphere, who just launched a breakthrough instant networking app, uses Google Firebase platform to develop its high-quality Android app. Pierre Yves Maria and Samuel Mamet, the co-founders of MySphere, shared their interesting experience of working from Mauritius with Android app developers across the world while targeting international markets. They are the embodiment of the fact that Mauritius is indeed an attractive place to run a business with strong willed entrepreneurs, excellent marketing resources and political stability.

Ict.io, is a online media start-up promoting tech events and start-ups from the Indian Ocean. Vincent Pollet, the co-founder of Ict.io, and his team have played an impactful role in the development of the technopreneurial ecosystem in Mauritius since a few years now. According to Vincent, the ecosystem is now growing faster in Mauritius, specially due to initiatives of IT passionate and innovative entrepreneurs who are joining forces and collaborating to support each other and build up a stronger community. 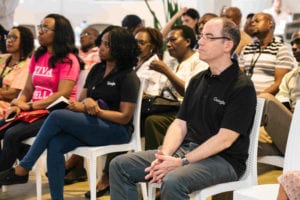 Doron Avni and Michael M. Murungi, respectively Director of Public Policy and Gov’t Relations- EMEA Emerging, and Markets Policy & Government Relations Manager represented Google with four others. The Google conference has been successful in reinforcing strategic links between Mauritius and the African continent. Policy makers were inspired by the conference on how they could support and play a role in innovation in Africa.